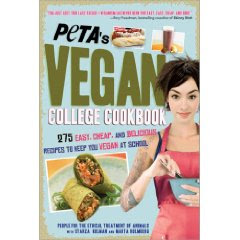 Being vegan in college doesn't have to be difficult, thanks to Peta's new college cookbook which hit bookstores this week. I was lucky enough to receive a review copy a couple of weeks ago, although before I even had a chance to look at it my college-bound daughter swept in and disappeared with the book. Let me just say that this is not a usual occurrence with my daughter and cookbooks.

A couple of days later I found her hunkered down on the sofa with the book (she was home sick with the flu), reading the book cover to cover. She was really excited (amazing, considering how sick she was...cough*cough*). "These recipes look so easy to make, and you can cook them all in your dorm room", she said. From vegan mac & cheeze, bean dips, ramen noodles, PB Bombs, Final's Week Fudge, Sloppy Joels and blueberry pancakes baked in mugs to Pizza Fun-Do, 'shroom dip, strawberry shake, No-Egg-Nog, Peach Cobbler and Fake Blondies. No stove needed. Of course you do need access to a microwave oven (and possibly a food processor or blender), although many of the recipes can be made with just a bowl and a spoon too.

My daughter has already said that she's taking the book to school with her. Apparently she also has her eye on my food processor and blender as well. I figure that this is a great thing though. Not only will she be cooking for herself, but I know that she won't go hungry. Now if I could only get her to start cooking before college, that would be cool.

Go check out Peta's Vegan College Cookbook, 275 Easy, Cheap, And Delicious Recipes To Keep You Vegan At School, by Sourcebooks, Inc. There's also a little companion video from the authors on You Tube.
Posted by julie hasson

I saw this in the bookstore the other day and was curious... Good to have your thoughts on it!