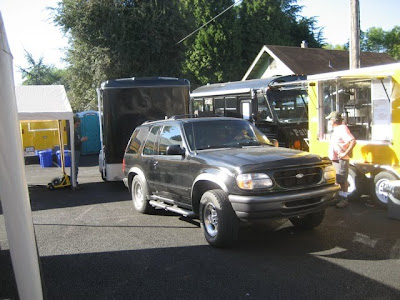 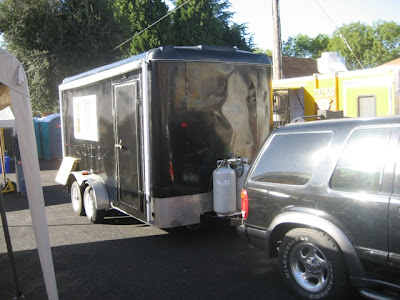 We physically moved the food cart to it's new home yesterday. It was so exciting to see it all tucked in amongst the other carts. There's still a few things that we have to take care of before we can open for business. We're aiming to officially open our doors next Monday, the 5th of October.

Now comes the millions of other details, like making sure that we have every tool and piece of equipment that we'll need to operate, compiling a list of all the ingredients we'll need to order, getting the right packaging, signage for the cart... There are so many details that my head is spinning. I must remember to do yoga in the mornings, to keep the stress in check.

So that's the scoop for the moment. I will let you know once we're up and running. Thanks again for all of the well-wishes and support!

P.S. Although I had brought the camera with us to photograph the event, I discovered the battery was dead as I went to snap photos. Thank you to the awesome woman who took these photos, and then so kindly emailed them to me!
Posted by julie hasson 8 comments:

We finally have a spot! We were just about to take one downtown, when the phone rang with a better offer. Talk about timing! It's official now. We will be moving in to the Mississippi Marketplace with the other awesome food vendors. We are hoping to be open by October 1st, if not before. I'll keep you posted.

Thanks for all the support!
Posted by julie hasson 7 comments:

Just wanted to let you know that I haven't fallen off the face of the earth. We have our initial approval, but are still searching high and low for a spot to open. This part is proving to be much tougher than we imagined. How hard could it be to find a perfect spot with lots of traffic, an electrical hookup, running water... Oy! We're learning a lot through this process, for sure.

I will post as soon as we know where our location will be. Please think good thoughts for us. We need all of the help we can get!
Posted by julie hasson 4 comments:

I think it's time to spill the beans about our newest project. It's not that I haven't wanted to share everything that's going on, it's just that sometimes I get a bit buggy-boo talking about things before they happen. The truth is that we're knee-deep in the permitting stage for a food concession trailer. Before we can proceed further, our plans are in the hands of the health department awaiting initial approval. This waiting is driving me bonkers.

The food cart scene in Portland has been absolutely exploding lately, and for good reason. There are so many inventive chefs and entrepreneurs, with creative food that runs the gamut from ice cream to stuffed hand pies, side dishes, stuffed waffles, vegan burritos to ethnic food, Belgian frites, vegan BBQ... You name it, it's happening in a tiny trailer on some street corner in Portland. So as a creative chef and food lover, I've often fantasized about opening a cart, wondering what type of food I would serve.

Then a few weeks back, I awoke one morning to find my husband with his laptop in hand, asking me how I felt about opening a food cart of our own. He had found a trailer for sale on Craigslist, that was all set-up and ready to go. Always up for a new adventure, I figured this sounded like a cool way to do some creative food, without the major headaches of opening an actual restaurant.

Needless to say, two days later we became the proud owners of a shiny black food trailer. The owner had set it up for himself, but had decided to move back home and was selling everything. "It's ready to go" he said. Well, maybe not quite ready to go. Jay has spent the last two weeks having the electrical fixed, replacing equipment that wasn't working and fixing things that weren't quite right. Now, hopefully, it's ready to go. For the time being we sit, waiting to get the initial approval from the health department. Then we can think about locations.

So now you all are up to speed on where we're at. We're holding our breath with our fingers crossed, hoping that we can make this newest venture a reality. Until then, I've got lots of cookbook editing to do. And a daughter to move to college. And a son going back to school... Life is good!
Posted by julie hasson 16 comments:

All Comments
Click here to read my Interview on Vegcooking.com