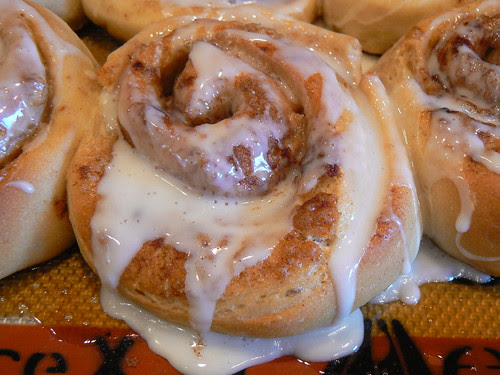 Although I'm in the kitchen cooking all the time, I don't always have time to bake for fun. I love my job, but every now and then it's fun to bake something special that has nothing to do with work. Case in point...these home-baked cinnamon rolls. And yes, they're vegan too.

My son has this thing for cinnamon rolls, and he nags me regularly to make them. Of course, he has a few rules too -absolutely no raisins or nuts! I decided to oblige him and bake up a batch. I adapted a recipe of Bryanna Clark Grogan's for her awesome Pumpkin Cinnamon Rolls (the recipe's in her subscription newsletter). I was out of pumpkin for the filling , so I rolled them up with some softened Earth Balance, brown sugar and lots of cinnamon. The icing on top is powdered sugar, vanilla and a little soy milk. These were absolutely delish, and my son was one happy camper.

Like your son, I have an incredible weakness for cinnamon rolls. I'm drooling at that photo because they look soooooo good! Now, unlike your son, I welcome raisins and/or nuts. Or just plain. I'm not fussy. The only thing I don't like it a ton of icing. Yours look just right. WOW!

Mmmm...they look lovely! And I bet they smell awesome too!

Thanks Carrie & Scottish Vegan! Actually, they were yummy and I wish we had more.

I think I'll bake some whole grain bread next.

Looking at this pretty photo, I see why your son has a thing for cinnamon rolls -- they look absolutely perfect! Wish I could have one. :o)

Now THAT'S a reason to get out of bed.

they looks so good!

Those cinnamon rolls look amazing! I wouldn't have thought to use soy milk in the iceing. Quite nice.

Somewhat relateing to such amazing cinnamon rolls, here is a quick comic about the intersection of political demonstrations and cinnamon rolls.