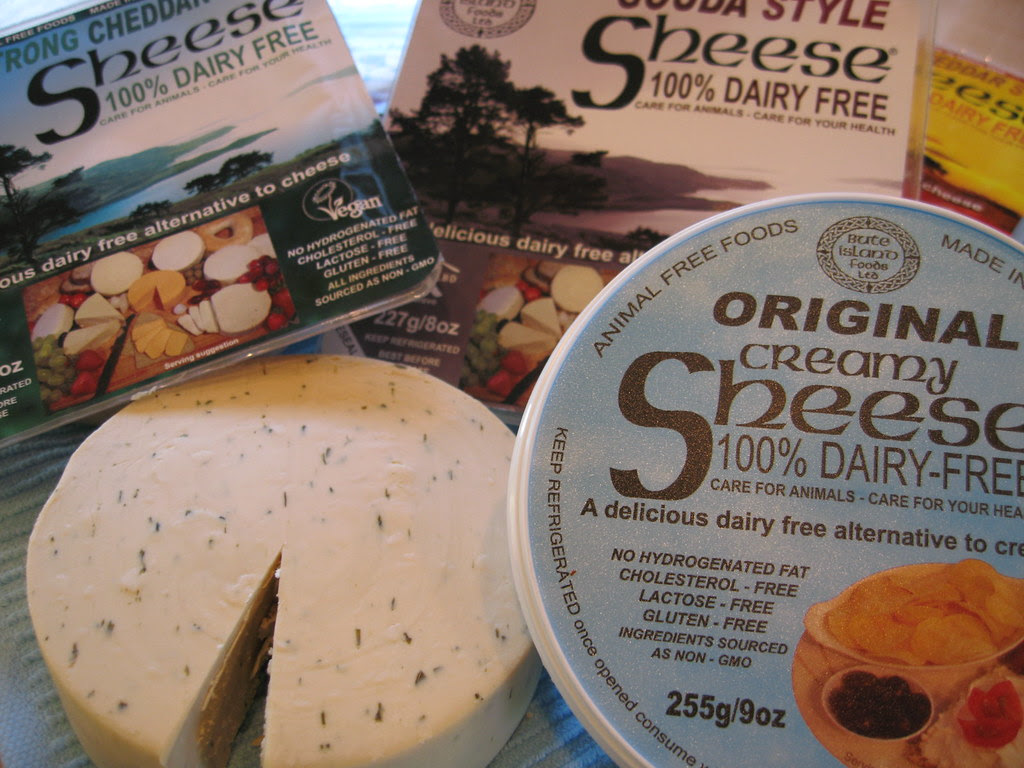 Had any bad vegan cheese lately? I've been wanting to blog about Sheese since trying it about a month ago. It's a line of Vegan cheese imported from Scotland. They have all kinds of flavors, as well as both hard and spreadable varieties (my personal favorites are the smoked cheddar and the blue). If you've been missing cheese, than Sheese just might be for you.

I had pretty much given up on the idea of vegan cheese up until this point. In my humble opinion, nothing has come close to the taste or texture of real cheese so I avoided them. I think that Sheese comes closest to the real thing. And I can once again serve cheese platters (with grapes, dried dates and crackers) when I entertain. It also seems to work well in recipes like beer bread, biscuits, panini and tacos. I haven't tried it in a sauce yet, but will test it out sometime soon.

It also seems that Bute Island Foods (the company that makes it) is pretty cool too. Four guys that were brought up as vegetarians and are passionate about producing vegan food (and they're cute too). You can find it online at Food Fight, or go to blackduckimports.com to get a complete list of where it's currently sold.

I'm dying to get my hands on some of this. I have yet to see it in the Toronto stores I shop in.

Hi Megan The Vegan! I thought that I heard it's available in Canada. Maybe you can email them through the website and ask where you can find it in Toronto.

Cute guys that make vegan cheese! Good enough for a cheese platter? Count me in. I'll have to scour the Co-op...

hi julie.. i have a question about your diner loaf.. i made it, and it's delicious, but i couldn't slice it and take a piece out of the pan.. it just crumbled. i'm pretty sure that i measured everything correctly, i baked it for 60 mins, and let it cool for more than 20... did i do something wrong? should i bake it longer? either way, i'm making it again ;)

Hi Vicki, If the Co-op doesn't carry it, go to www.blackduckimports.com. They have a list of all the sources that have it.

Hi Michelle, sometimes it can be a bit tricky getting the first slice or two out. It doesn't stick together exactly as meat does. Also, sometimes it's easier to slice it after it's been refrigerated overnight. I just serve it with gravy so no one notices anyways ; )

I haven't seen any Sheese over here, but as I will be in Scotland in 2 weeks I think I can wait till then to try it! I have heard it is so good, I am excited to try it!

It's not the first time I hear about this vegan cheese, unfortunately there is no any possibility to have it here in Italy where I live!