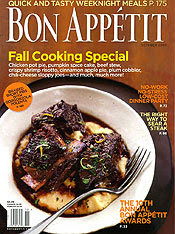 Magazine articles are such a funny thing. They are often written a good 6 months to a year in advance. Actually, books work the same way. My pie book isn't scheduled to be released until September of 2008. So you're always working on projects that are way off in the future.

This is what happened with an article on Fall desserts that I wrote for Bon Appetit. I think I must have worked on it close to a year ago, so I had completely forgotten that it was coming out in October. Last week the new issue came in the mail, and it wound up sitting on my dining room table for several days. I finally picked it up the other night and started flipping through it. I noticed a picture of a pumpkin cake in the beginning and thought "hmmm, that cake looks familiar. Well duh, it was my recipe! That'll teach me to pay a little more attention.

The magazine did a beautiful job with the photos and layout. It makes me wish I had a food stylist at home when I cook. If I could just train my kids, right? 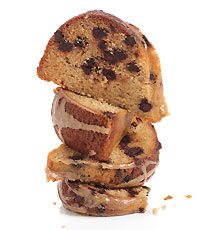 If you get a chance, check out the magazine. Alas, the recipes in the article aren't vegan though several could be veganized. Now I'll just have to come up with a decadent vegan butterscotch pudding. Yum!
Posted by julie hasson

I'll definately pick up a copy at the grocery now that I know you're in it! and I'll also wait up for some vegan butterscotch pudding!! Hey, I tagged you for a meme if you're down...

Congrats on getting your recipe published in the magazine! I will certainly be checking it out...I love trying to veganize non-vegan recipes! Thanks for sharing :-)

That looks gorgeous, Julie! I'll be getting a copy any day now!

Thanks Vicki. I've never been tagged before, so I'll have to get cracking. Hopefully I'll have some time to make a vegan butterscotch pudding soon. It sounds so good.

Thanks Vegan Noodle. I'll try and veganize a couple of them and post them on the blog.

Hi Bryanna. So fun to have you stop by. Wouldn't it be nice if the food magazines actually featured vegan recipes and desserts. Maybe one day.

Strangely enough this past issue of B.A. was the last one in my subscription... I will def. be trying the pumpkin cake recipe for sure!

I just got the issue, Julie-- it looks BEAUTIFUL and DELICIOUS!!!

HA! That's funny. I find things like that I did on the internet and my bad memory makes the worst of it!

I found it Friday evening and read it. Good job!