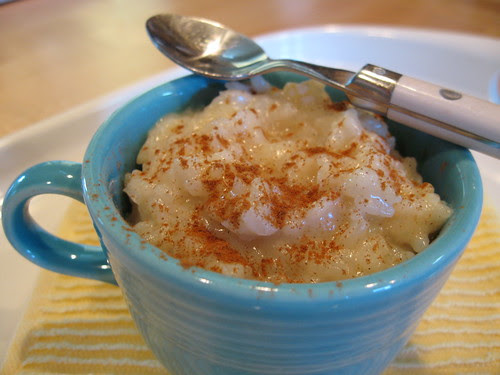 I've always been a pudding person, and rice pudding is no exception. It's so quick and easy to make, I never mind throwing it together spur of the moment. I often make a double batch, because my kids love the leftovers for breakfast. I have a basic recipe which I use as a blueprint, and then will often vary it depending on my mode. Sometimes it's vanilla all the way, with a sprinkle of cinnamon on top. Other times it's chai spice or pumpkin or almond. I love the versatility. It really is endless.

Here's my basic rice pudding recipe, just in case you're in the mood.

1. In a saucepan over medium heat, combine water and rice and bring to a boil. Cover, reduce heat to low and simmer for 15 minutes. Remove saucepan from heat and let sit, covered, for 5 minutes.
2. Add milk and sugar to cooked rice, stirring well. Return saucepan to stove. Cook over medium heat, stirring continuously, for 15 to 20 minutes or until very thick and creamy. If pudding is too thick, thin with a little more milk until desired consistency. Remove from heat and stir in vanilla extract or paste. Let rice pudding cool slightly before serving. If desired, sprinkle with ground cinnamon before serving.

For variations:
Almond, add 1/2 to 1 tsp almond extract in place of the vanilla
Raisin, simply toss in a handful of raisins when first cooking the rice. This will plump them up nicely (or add in with the "milk")
Pumpkin, stir in a little canned pumpkin puree with the "milk". You'll want to add pumpkin pie spice too, or ground cinnamon, allspice and nutmeg to taste.
Chai Spice, substitute unsweetened brewed chai tea as part of the "milk" -maybe 1/2 cup or so (or to taste). You can also add some additional ground spices for extra flavor
Ginger, stir a handful of finely chopped candied ginger in at the end of cooking (maybe a 1/4 cup or so)
Posted by julie hasson

Thank you so much, Julie for this recipe. I used to love rice pudding and have yet to make one that tastes as I remember. Can't wait to try yours! And chai spice? Hello!

Do you think this recipe would work with brown rice? I haven't had rice pudding since I was a kid, but it sounds so good!

Hi Alisa, I don't know how this recipe would work with brown rice. I need to try it out. I think brown rice would need to be cooked longer at the beginning of the recipe. I do make rice pudding with brown rice, but cook it in a different way. I'll play around with this recipe soon and post my results.

Hi Aimee, I hope this tastes close to what you remember. The chai spice version is really good too.

Hi Jess, you know me and puddings! Yep, the pumpkin pudding is pretty yummy. I think I even tried a green tea version once that was really good.

Your pudding looks so cute (& yummy) in the blue mug - Love the variations! How was SL?!

I made this on Sunday and it was awesome.

There is a recipe for rice pudding using brown rice in Lorna Sass's whole grains cookbook that sounds good, but I haven't tried it yet.

Please sign the petition against Guillermo Habacuc Vargas, the 'artist' who starved a dog as an 'art exhibition', and/or spread the story to others. Here is the coverage so far: http://reiskeks-natividad.blogspot.com/ Thank you!

This was a wonderful breakfast. I added coconut milk instead of rice milk - YUM!
Thanks.