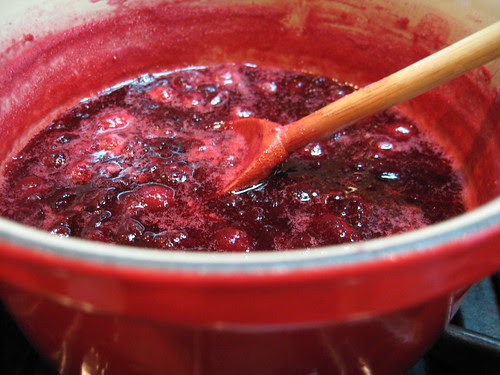 Believe it or not, we were able to squeeze in a Thanksgiving segment this week. It's really thanks to all of the hard work by my husband Jay. I don't know how he does it, but somehow he does and then it magically appears on our website.

We filmed my favorite cranberry sauce. Now, before you start thinking "oh, just cranberry sauce", think again. This one has sangria flavors, which in my opinion takes cranberry sauce to a whole new level. Red wine (or port), cranberries, lemon and orange. It's so good. In fact, the entire pot of sauce that we made while taping the segment, quickly disappeared before I even had a chance to refrigerate it. My kids came home from school and immediately started eating it out of the pot. If you're worried that my kids were eating an alcoholic sauce, don't. The alcohol cooks right out. You can find the recipe and segment here.

I've also been trying to figure out what our Thanksgiving menu will be. Every year I think that I'll change things up. Every year my daughter protests that I can't change a single thing. I've decided that this year I'll jazz up our traditional menu. For the mashed potatoes (made creamy with plain soymilk and a little Earth Balance), I'll spice them up with finely minced garlic and parsley (whizzed in the processor). This might not seem like much, but the flavor of finely minced fresh parsley and garlic is amazing. Fresh, bold, vibrant... The magic ingredient that my French grandmother stirred into all of her dishes.

Yams are another favorite around our house. I usually roast the yams in a 400°F oven until they are just soft. Once cool, I peel and cut into thick slices. I layer the yams with sliced apples that I've sauteed until soft with apple cider and spices. Then I make a sauce, reducing apple cider, brown sugar (or maple syrup) and spices. I pour the sauce over the yams and apples, sprinkle with more spices and cover and bake until bubbly and soft (basting yams as needed with the juices). I think I almost like this better when made the day before and re-heated on Thanksgiving. This year I think I'll punch it up with a little bourbon and orange or tangerine zest. It's also amazing sprinkled with gingerbread cookie crumbs.

Also on the menu will be either green beans or roasted brussel sprouts and a salad with greens, sliced persimmons, candied pecans and a sprinkle of pomegranate seeds. Oh, and in place of stuffing this year, I'm going to make wild rice with dried cranberries, wild mushrooms and toasted chopped hazelnuts. I'm full just thinking about all of the food. Oh, I forgot that I'll also make one of Bryanna's seitan roasts, because I love it so much on sandwiches with cranberry sauce. I'll also make her amazing gravy (wheat-free), which we've nicknamed "crack gravy" (it's really addictive). I'll add shitake mushrooms and a splash of sherry to the gravy too. I was going to make roasted butternut squash and shallots as well, but I think that might be overkill. Can you tell how much I love this holiday?

My brother loves to put together an appetizer spread, to pre-stuff us before the meal. I think we might have crostini with Caviart (a really good vegetarian caviar) and Tofutti sour cream. Anyone who thinks that vegans are deprived should think again.

Oh, I forgot the desserts. Should anyone have any room left, I'm going to make Bryanna's pumpkin pie and a mixed berry crumble, which I like to bake in a large cast iron skillet. It's a really fun presentation. For the crumble I cook together frozen mixed berries (blueberries, boysenberries and raspberries) with a little water, sugar and cornstarch to thicken. Once thickened and glossy, I scoop it into the skillet and top with a crumble topping (flour, oats, brown sugar, cinnamon and a little melted Earth Balance). I bake the crumble until the topping is golden brown. Voila, easy as pie!
Posted by julie hasson

I really wish I lived closer to you! I'd definitely stop by for Thanksgiving. Your food sounds like it's going to be wonderful this year!

Thanks for posting the link to Bryanna's pumpkin pie. I made it last year and we loved it, but had misplaced my copy. I love your cranberries. Thanks for stopping by and your kinds words. Happy Thanksgiving!

great idea with the wine in the cranberry sauce! I made roasted apple and cranberry sauce with a little orange and lemon zest in it, but I may go back and mix in some wine now too. thanks for the great idea!

Julie, that cranberry sauce KNOCKS ME out. seriously. amazing. If I can make it without Thomas noticing the wine going in, I'm going to use your recipe tomorrow..

Wow! That all sounds sooo amazing!! I love cranberry with a hint of orange. I would eat that right out of the pot too!
Happy Thanksgiving!

I made the cranberry sauce and totally ate a lot of it right out of the pot. It goes really well with the chickpea cutlets (although I made mine with white beans instead) from the Veganomicon.