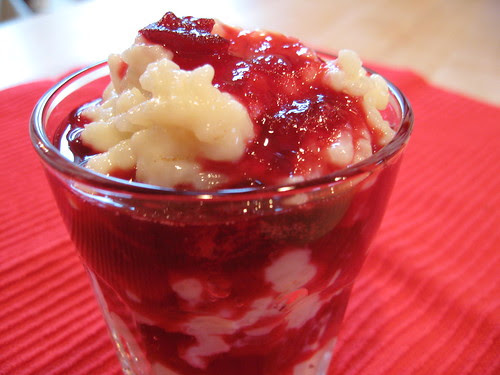 I've also got a couple other ideas for "the sauce" if you're in need. It's delish with soy yogurt and granola for breakfast, stirred into oatmeal, blended into a smoothie, shaken with chilled vodka and a twist of lemon or lime, tossed with shredded carrots and served as a salad (this idea was courtesy of Trader Joe's), spread on ginger cookies (my daughter's contribution), stirred into a salad dressing or vinaigrette, on a Tofurkey sandwich, dolloped on top of pancakes or waffles or as an ice cream topping. Oh, I also forgot to add that it freezes well too, so there's always that option.

Although I had every intention of photographing our Thanksgiving meal, it didn't happen. Everyone started digging in as I was putting the food on the table. My family is certainly not shy about eating. Fortunately, I was able to snap a couple pics of some of the dishes while we were cooking. Everything was delicious and worth the three days that I spent in the kitchen. Now I want to eat nothing but soups and salads for the next month.

Mashed yams with sautéed apples, bourbon maple syrup and crushed ginger cookies (before baking), that my brother and I made. This is definitely one of my favorite Thanksgiving dishes. 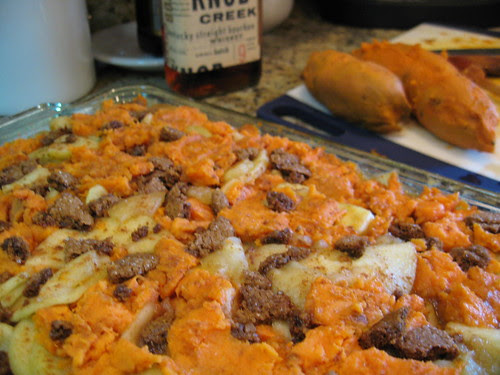 Vegan pumpkin pies (Bryanna's recipe). One was baked in a gingerbread cookie crust (the pie on the left), which completely stuck to the pan. I guess I didn't grease it well enough. The other pumpkin pie was baked in a traditional oil crust. They were both very good. 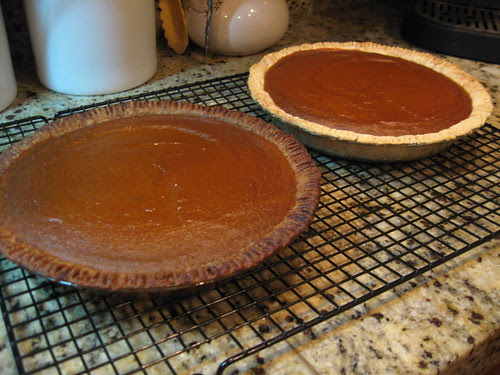 I needed a dessert for the night before Thanksgiving, since everyone was arriving at dinnertime. So thanks to Deirdre Jean for her suggestion, I made the Lower-Fat Chocolate Bundt Cake from Veganomicon. Deidre said it needed a topping, so I glazed it with chocolate ganache. The cake was fabulous, moist and devoured in no time. Since we had a mixed bag of eaters (mostly omnis at our vegan Thanksgiving), I was hoping that chocolate would seal the deal. It definitely did. We also had Bryanna's amazing award winning chili, but that was eaten before I could get a picture. 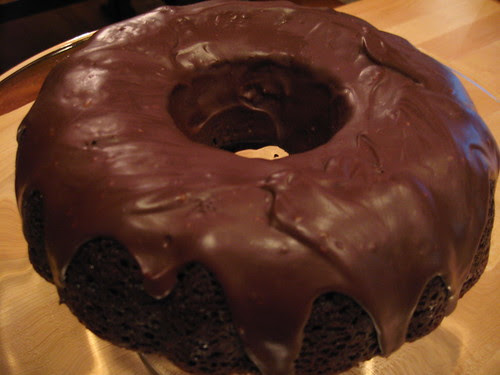 Now that Thanksgiving is over, I'll start posting some yummy soups and stews. It's definitely in the air now, at least around our house.

I hope that everyone had a fantastic holiday!

I love the parfait! I liked the idea when you left me the comment about it, but now that I see it, I adore it. I'm trying to figure out if I like cranberries enough now..

Mmmmm feel free to send me some of that Bundt Cake ANY time! It looks scrumptious!!

I love the parfait too. Might have to give those a try soon. Perfect summer weather for them over here right now.

I need some chocolate cake now!!

how was the pie? i didn't even get to taste mine :( i'm glad to see yours came out dark too, 'cause my husband told me it looked more like a chocolate pie than a pumpkin pie. i might have to make up a batch of that cranberry sauce just so i can pretend i have leftovers to use in all those awesome ideas you posted! WHEEEE!

That chocolate cake sounds wonderful. I have a bundt pan that I've never used and your cake would be the perfect opportunity. Great idea to top it with the ganache!

The same thing happened at our meal. I forgot to take pictures and then the food was gone or not worth taking a picture of . I will post the pictures of the pies in a couple days. It has been a rough week. Oh, I made Bryanna's pie and it is wonderful!!! I have cranberry sauce left to, what a great idea!

Hey Jess, maybe you'd like cranberries better if you mixed them with other berries like boysenberries, blueberries or raspberries in a sauce.

Hi Vegetation, if the cake weren't entirely gone, I would send you off a piece. You should give the cake recipe a try. It really is excellent.

Hi Vegan Noodle. Have you tried this cake yet?

Hi Joni. The pie was delicious. It is highly spiced though, which is why the color is darker on it. I kind of went a little cranberry crazy this week, huh? The rest of my sauce is going in the freezer today.

Hi Vivacious Vegan. You should totally start using your Bundt pan. They make the prettiest cakes. The ganache does make a delicious topper.

Hi Veg-A-Nut. Yeah, I guess it's pretty much "you snooze, you loose" with the food pics. I can't wait to see the pictures of your pies.

Julie, a mixed berry sauce sounds wonderful. I still have at least 1.5 cups of my cranberry sauce to use.

However, on a separate note - I made two of your recipes last night! I am so happy with how they turned out. I posted it on the ppk, and will post on my blog today or tomorrow.

Oh my god, that cranberry rice pudding is the best idea I've seen in forever. I used up all my leftover cranberry sauce (as a pancake topping) but I'm totally making more this weekend. Drool...

Isa, you're totally right, I blew the whole "lowfat" part of the cake. I saved it a bit though by using soymilk though for the ganache.

Hey Jess, I'm so glad you liked the recipes.

Hi Kris, it was a spontaneous idea that tasted good. Now, what to do with the rest of the cranberry sauce...

oh wow that cake. i think i must make it! on the rice pudding tip - i modified a recipe for coconut rice pudding that's vegan and awesome. it's on my blog if you want to check it out.

Everything looks amazing.. but the sweet potatoes are calling my name.

I'm going to make that cake I think for my mom's bday, but I'll probably make drizzle it too..