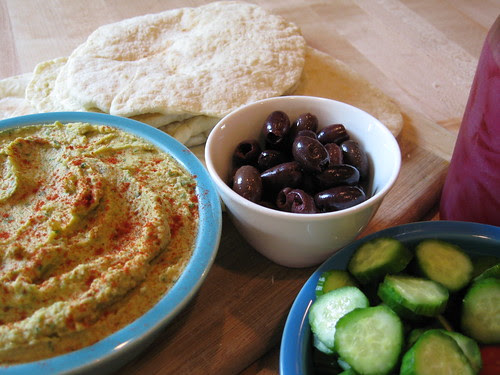 Now that the book is done, I'm having such a fun time cooking and experimenting in the kitchen. I've been playing with homemade soy milk recipes, baked goods and the big one today...gourmet vegan sausages. Once I get the recipes down, I promise to take some pictures.

The soy milk is something that I've played with off and on for a while. I'd prefer to have homemade over store bought as it's much healthier (and cheaper too). The only issue I have with it is the slightly beany flavor, but I know that it's just something you have to get used to. So I've been trying to play around with different flavorings to see if I can make it a little more palatable. Actually, my husband really likes it and even dips his cookies in it. Go figure. I guess I'm a harder sell.

The sausages that we made tonight are amazingly delicious! As soon as we get the recipes perfected we'll film them for Everyday Dish. Jay made one tonight that I can't stop eating it's so good. I find it so cool to be able to make sausages at home. I love creating whatever flavor combinations strike my mood, and they taste so much better than what you can buy in the store. I'm thinking grilled sausage and peppers are definitely on tomorrow's menu. They should freeze well, which will be nice to throw in soups and stews.

The funny thing is, even with all the cooking we've been doing, getting dinner on the table can still be a big challenge. It seems that the kids are either coming or going right as I need to start cooking dinner. Between driver's training/ed, diving lessons, school clubs, orthodontist appointments, my daughter's job... it's never ending. The best solution I've found so far is to cook up big pots of soup, beans, etc... That way I can get several meals out of each pot. Hummus is a favorite, as well as minestrone, dal, white beans, lentil soup... I try to remember to soak my beans the night before, and then pressure cook them (or the soups) in the afternoon. So much for creative dinners. 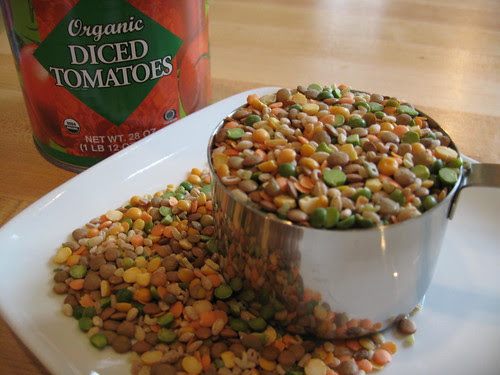 Makings of a quick soup, minus the celery, onion, garlic and spices

Hopefully things will slow down a bit in the next couple of weeks. Anyone else in the same dinner boat?
Posted by julie hasson

I make my own soy milk out of Laura beans with maple syrup, vanilla and salt...yum!

Good luck finding a good method to make homemade soymilk! Do post it when you figure it out... it's such a good staple to be able to make yourself! -Amy@Wheeler's

Totally know what you mean--sometimes I feel like even if I get tons done in advance I'm still rushing to get dinner together...I guess it's just like that. Glad to know it's not just me.

I can't wait for the sausage recipes! I've had some luck making my own sausages; they're so good!
I think I'm going to soak some beans tonight, you've inspired me!

I am so with you on the dinner thing. I just don't get it. And who wants to go to a lot of trouble if no one is going to sit down and eat it while it is hot! I am searching for good recipes that will heat up well. THen I can put it together in the morning and everyone can reheat that night. My friend has dinner at 4:00 when her kids get off the school bus! My dh doesn't work from home though, so this doesn't work for me!!!

I am much too excited about these sausages...

How is that soup mix, by the way? I bought it in bulk once, and then never used it...

I love vegan sausage, but hate the price and some of the ingredients in them. Of course you have the vegetarian sausage, but why egg whites? Bummer I say everytime. I can't wait for this recipe. What a dream come true! Thanks for stopping by my blog. I am trying to get passed loosing my Tilly, but have been struggling. I really miss her. I also lost my photo program on my computer and can't post any pics, needless to say between bouts of sadness and computer programs my blog has been empty since Tilly's death. I you stopping by. I will be back! By the way I have been living off of lentil stew all week. You just can't go wrong!

Oh I hear ya!! Only it's not the family running here and there for things - it's me. I like to do batches of things so I can throw together a quick meal. Portable is good too since I eat a lot on the go.
Vegan sausages!! I'm very intrigued. Can't wait to hear more.

That sure looks like it was about to turn into one tasty and hearty soup. I've been a soup fiend lately, especially with the cold weather, so I would have been very happy to see this on the dinner table.

I hope things slow down for you!

Soups are totally the best way to go on busy days, or any days really.