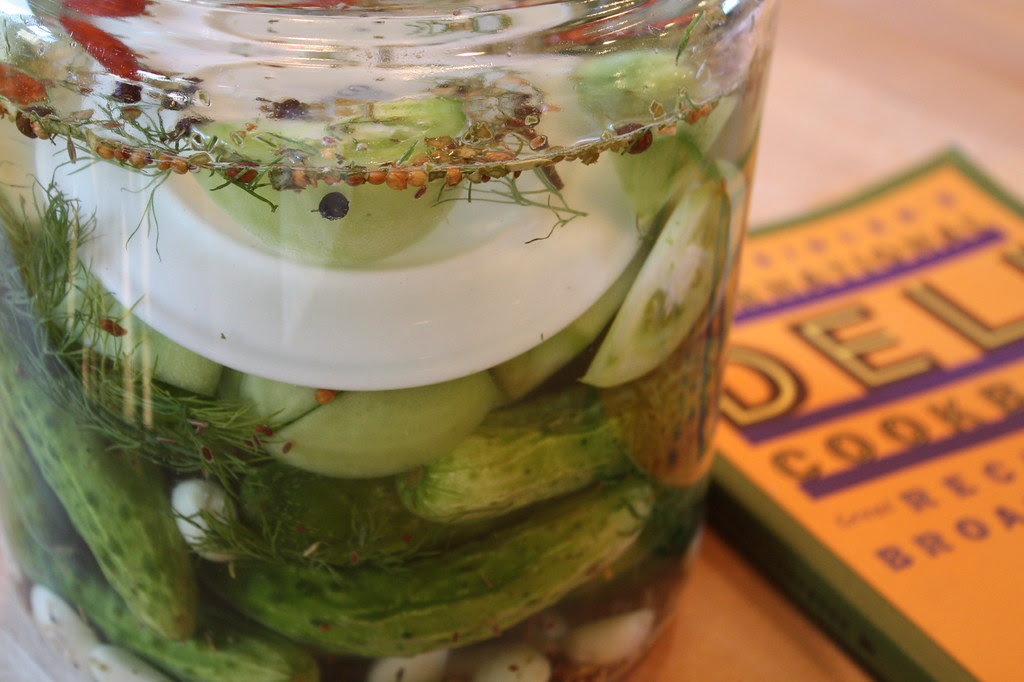 As you can probably tell by now, I love making food from scratch. It's usually fairly easy to prepare, can be customized to your palate and tastes, and is better than anything you could buy at a store. I like to think of homemade food as the ultimate in Artisan craft.

So what's my latest project you ask? Pickles. My love of pickles goes way back to childhood, to the awesome bowls of sour dills that would grace the table at our local deli. I loved the crunch of these freshly pickled cukes, the salty yet lightly sour taste. These pickles bared no resemblance to the softer, vinegar-flavored pickles found in grocery stores. These were the real deal, true deli-style salt-brined Kosher dill pickles. It took me a long time to find a recipe that fit this bill. I am happy to say though that it was not in vain.

In the early 1990's a modern, hip-style deli opened in Santa Monica, California. The concept of the Broadway Deli was Jewish deli meets hip eatery. They had lots of inspired dishes on their menu, artisan breads and great desserts. In 1994, they came out with a cookbook, and right there in it's pages was the recipe that I had been searching for: true, salt-brined Kosher dills.

I don't think that the cookbook is any longer in print, so I'm going to post the recipe here. Feel free to add green tomatoes, lots of extra garlic and even dried or fresh chili peppers. I hope that you enjoy them as much as I do. They're really quick and easy to make, and can be stored in your fridge for quite a while. Plus, you should be able to find pickling cukes at your local farmer's market right now. If you have lots of green tomatoes on your tomato vines, which won't have a chance to ripen before the cooler Fall weather rolls in, this is a perfect thing to do with them.

These pickles taste just like the one's grandma used to make, only they're faster and easier to prepare. To transform bumpy little cucumbers into crisp, garlicky dill pickles, place all of the ingredients in a jar, cover, and shake. In four days you'll have the best dill pickles you've ever tasted.

1. Pour boiling water into a 1-gallon canning jar and pour out. Drop pickling spices and 3 of the garlic cloves into the bottom of the jar. Arrange cucumbers in the jar to fill just up to the neck. Top with salt, remaining 3 garlic cloves, and dill. Add cold water to cover. Cover securely with the lid. Shake well and let stand for 3 to 4 days in a cool, dark place before serving.
2. Refrigerate after 4 days to stop the pickling process. The pickles will keep for several weeks, covered, in the refrigerator.

P.S. If you're wondering why there is a plate in my pickle jar (in the photo), it's because I doubled the recipe and topped the cukes with a plate. This helps to keep the pickles submerged in the brine.
Posted by julie hasson

Today's CSA box will bring me cucumbers, and into the pickle jar they go!

Pickles! I haven't had any in forever; I'd forgotten how much I loved them until now.

I just ate the last of some homemade squash pickles. I'll make these next - thanks for the recipe!

Only 4 days?? They've only just begun! I think they're perfect at about 2 weeks. I highly recommend the Joy of Pickling if you haven't already found it. Great pickling recipes. Also the new one about preserving without canning or freezing. Both great.

Thanks so much for this recipe! I can't believe how easy it is, too!
My grandfather was Ukrenian and he used to make the best dill pickles ever.

Ooh, we love pickles! I want to find the time to try these, Ryan would be thrilled!

Yum. Being Polish, I grew up snacking on these.

I opened these today, after 4 days in the fridge, and they are so so very good! I can't believe how easy they were to make, and what a great result! My cucumbers were larger, so I cut them into chunky slices. Thanks for the recipe!

OMG I need to make these asap! Those pickles look and sound amazing! Green tomatoes would be fantastic as well...

Thank you for the recipe. i have made 2 batches, i have one concern, the brine turns a light brown and stays that way, in your picture the brine looks clear. any suggestions? i have followed the directions to a T.
thank you,
mike

I just tried this recipe & can't wait to taste the pickles in 2 more days!!! One question though, soem of the cucmbers I used are a bit larger, should I increase the time to let them sit in the brine? Thanks!!

I used to go to the Broadway Deli in the late 1990s and was obsessed with their asparagus lasagna. Do you know if the cookbook has the recipe?